If there’s one thing the nuclear energy supporters aren’t short of its eternal optimism. Like a compulsive gambler, after a string of repeated failures, they’ll still be convinced a “big win” is always right around the corner.

Take the situation in the UK. As I pointed out, the collapse of the Horizon Project makes it highly unlikely the UK nuclear industry will succeed in maintaining its existing output, nevermind expand it in any way. In fact they’ve probably left a sizeable hole in the country’s power grid, that will likely be filled by yet more Gas-fired stations ….course it could have been renewables (notably the Severn barrage) if they hadn’t lobbied so fiercely against them….. 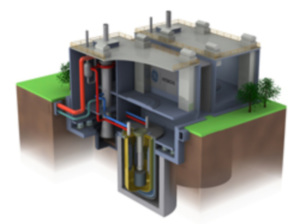 But instead the UK blogs of nuclear energy supporters have largely filtered out the bad news of the collapse of the Horizon Project and are instead alive with chatter about the S-PRISM reactor which Hitachti are proposing to build at Sellafield. This reactor would be used to consume the UK’s stockpiles of Plutonium and transmute it into a form where it can’t be used for weapons manufacture. However, all the nuclear cheerleaders succeed in doing is demonstrating how little they know about the very thing they are advocating.

As I’ve discussed previously, Fast Reactors, such as the PRISM do not have a brilliant record. Indeed anyone who knew a little more about them would generally try to quickly change the subject whenever someone like me brought the matter up!

Many (if not all!) Fast Reactors have run substantially over budget and been built late. Monju (Japan), the world’s most modern took tens year to complete, cost $5.9 Billion, despite its tiny 280 MW output. That’s about $21,000 per installed kW! 3 times the cost of PV at the time of its installation, 8 times the cost at current market prices, and 17 times the installation cost of wind energy!

Fast reactors (good history of them here) are also unreliable. The UK’s Dounreary fast reactor was famously known as “the 10% reactor” (discussed in chapter 10 of this book here) as this was its average lifetime capacity factor….and nuclear supporters are forever going on about wind farms and their capacity factor, which are at least three times better than that!

Other fast reactors haven’t fared much better with Superphenix managing a 7.79% capacity factor, and Monju (again) has spent most of its life offline for maintenance….maintenance brought on by a set of two leaks of its Sodium coolant which led to fires!

This of course brings up the issue of safety, fast reactors have a generally poor safety record. Most notably EBR-1 reactor, which melted down in the US in the 60’s, as did the SRE, and the Fermi-1 (this last accident led to the slightly polemic piece “we almost lost Detroit”). Both Dounreay and SP Superphenix had various accidents and incidents also, which ultimately led to the closure of both plants. Russia’s BN-600 suffered 27 sodium leaks, 14 sodium fires over a 17 year period! Unsurpisingly, the plant was quickly closed after the fall of communism (once Russia got a moderately free press!). 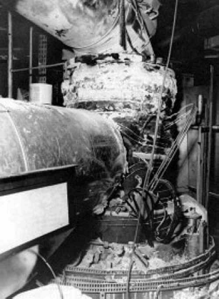 Again, this is all not really surprising as a Fast Reactor has to do several things at once that are very technically challenging. The high heat flows and operating temperatures required by fast reactors, plus the need to maintain a high neutron flux, usually means the use of liquid metal coolants like sodium. As this sodium must be kept hot (to avoid it freezing solid) it also needs to be kept away from air or moisture, as it can catch fire in the presence of either (or potentially explode!). This latter point means the heat exchangers, where the sodium transfers its heat to water to make steam, are often a major stumbling block as they tend to be quite complex and maintenance hungry.

And that high neutron flux, combined with high temperatures creates problems. As I describe in this chapter, this can lead such a reactor to become vulnerable to creep as well as degradation in material properties due to neutron bombardment. This usually means many key components of fast reactors have to be made out of exotic alloys and in some cases need regular inspection and replacement.

Should anyone still not except that fast reactors are uneconomics white elephants, consider the study below, which is very similar to another similar study that was widely circulated in the 70’s. This compared a Fast Reactor to a Heavy Water reactor (an obsolete reactor design I pour scorn on here). Even so, the Heavy water reactor works out as a far more economically viable choice, even given the fairly optimistic variables for a breeder reactor given below. And when I say optimistic, consider that they assume an 80% capacity factor, despite the fact that no fast reactor has ever demonstrated anything like that level of performance. Also you will note that the actually construction costs of the Monju plant are about 16 times higher than the assumed constructions costs for Fast Reactors below…and it still comes out as being more expensive!

Economic cost comparison between a PHWR and a Fast Reactor design, in 2004 US Dollars [Credit: fissilematerials.org]

There are alternative proposals for a “Gas cooled Fast reactor” that may get around many of these technical problems, by eliminating the sodium coolant. I discuss the relative merits of this design here. The GEN-4.org forum also discusses the design. 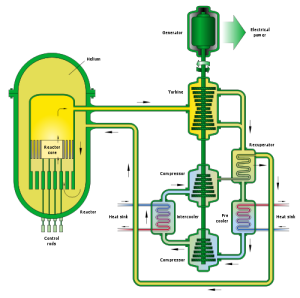 But either way, looking on a Fast reactor as a source of energy is probably unrealistic, as even these Gas Cooled fast reactors will likely have a relatively poor capacity factor (thought probably better than a LMFR) and still be more expensive than either renewables, or conventional reactors. Building any such reactors at Sellafield would purely be non-proliferation exercise with little to do with mass power generation. Any electricity generated would be uneconomic and purely a sort of “bonus” to make the job of whoever signs the cheques each month that little bit easier.

Also the supporters of the fast reactor option seem to think that Fast Reactors are some sort of disintegration machine (i.e. that the nuclear waste goes in and just disappears). That’s not quite how it works.

All a Fast Reactor does is transform long lived nuclear waste  into a form with a significantly shorter half-life (thus its “only” radioactive for a few hundred years rather than hundreds of thousands of years, making long term storage more plausible and avoiding the risk of them being turned into bombs)…..of course in the meantime its still highly dangerous and require storage and security to protect it. Indeed some of the stuff will be more radioactive when it comes out of the Fast reactor than when it went in! (of course this is hardly surprising, stuff with a shorter half life tends to be more radioactive that those isotopes with a much longer half life).

The reality is that order to function effectively (as it takes multiple passes through the reactor to break down the waster) Fast Reactors require reprocessing of spent fuel. A good deal of the current mess that the UK nuclear industry is stuck in, notably as regards Selafield, can be traced back to this decision to reprocess commercial reactor fuel, when by and large many other nations went for once-thro.

Supporters of the Fast Reactor will at this point typically attempt to split hairs, pointing out that it relies on the use pyro-processing techniques rather than current PUREX method (which they claim will be cheaper, safer and more reliable). However there is good reason to doubt whether this will be so, as the 2011 MIT report mentions. The Union of Concerned Scientists points out (see graph below) that such a tactic could actually increase the inventory of nuclear waste rather than reduce it, as you’re basically trading a modest reduction in HLW for a massive increase in LLW and ILW.

Also, as I’ve discussed previously, its likely that deep geological storage and immobilisation of waste will work out much cheaper than building fast reactors.

But more to the point, why is the S-PRISM being proposed for Sellafield? Well largely because both sides are desperate. Hitachi have been trying for the best part of a decade or more to sell this reactor to someone, but nobody, neither they’re own government, the Americans, the French, nobody seems to want to bite (why? read the paragraph’s above). 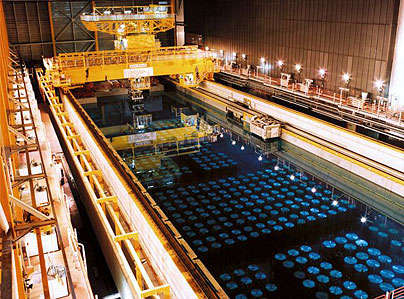 Equally, the nuclear lobby in Britain are also desperate. That policy of reprocessing has left them with a pile of plutonium. But THORP is on its last legs and will likely need to close or be replaced soon. Efforts to talk up a new replacement “Mega THORP” have failed, largely because, post-Fukushima nobody wants to buy the MOX fuel the plant produces. Even the UK reactor operators (again see “Going critical” for a good history of the UK nuclear industry) have long acknowledged that dry storage of waste and once thro operation is cheapest way of running a reactor. Cash strapped as they are, they fail to see why bailing out Sellafield is their responsibility. 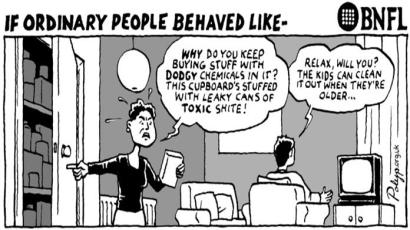 So in many respects, by the UK Nuclear lobby even entertaining the idea of this S-PRISM reactor, merely amounts to them putting up the white flag and admitting defeat on the issue of reprocessing – it doesn’t work and merely increases costs, endangers safety and increases the volume of nuclear waste we’re left to dispose of.

The nuclear lobby will often claim that the UK has no choice other than disposal of Plutonium wastes via fast reactors (exhibiting the usual selective deafness to other alternatives). However, there is the option of “immobilization” and Vitrification of the waste (the Pu is mixed up with something that it would basically be a pain in the ass to separate from again and then encased in glass), some technical details on this from the DoE can be found here. The Federation of American Scientists, discusses the matter (in relation to nuclear weapons waste and non-proliferation) here.

Many studies have concluded that the Vitrification approach is generally safer and more practical (not least because the technology to do it already exists, while to put the Pu in a fast reactor it will need to be processed into a metallic form, which raises certain risks). Reports by both MIT and Harvard on the nuclear fuel cycle have concluded that vitrification and burial are cheaper too.

Of course, as I’ve pointed out before (see here), a fact I would note that is backed up by pro-nuclear sources (such as the WNA and Dr MacKay) there simply isn’t enough Uranium (or Thorium) in the world for us to sustain the current level of nuclear output for any sizable time period, let alone expand such operations. So again, this S-PRISM announcement amounts to an admission of defeat on this topic. Nuclear will always only be a small bit player in the global energy market.

So this S-PRISM announcement is more a sign of growing desperation in the UK nuclear lobby. But then again with the right propaganda you can turn even a crushing defeat into a victory, remember that guy in the Iraq war (minster for propaganda) saying there are no Americans in Baghdad….but like I said, I frequently find that many supporters of nuclear energy are somewhat ignorant of the facts or how what they are advocating even works.