What is so bad about Wind farms?

I was out on the hills during my recent time in Ireland during which, once or twice I came quite close to a windfarm (on average 25% of Ireland’s electricity now comes from wind although it can hit highs of +40%). Sometimes my route came as close as 500m to the base of the towers. Did they stand out as a blot on the landscape? Well actually no! On both occasions I was unaware of the wind farms presence when I started the walk as they weren’t visible from the valley below. Clearly the designers had deliberately sought to do this by careful positioning of the turbines.

And what about all that noise we hear about wind turbines making? Well like I said, at 500m I was a lot closer to them than any house and I heard….nothing. I even stopped on a few occasions (they were turning as there was breeze up) and the only thing I could hear was the wind shaking the heather or the sounds of birds twittering.

And speaking of birds, did I see a pile of them dead at the foot of the tower? Ah…no! There have been a few bird deaths due to turbines true, however this has to be put in the context of how much birds are killed by other structures. Indeed once we account for the impact of mining (e.g. of coal), oil spills and pollution, the impact of wind turbines on birds is tiny and much lower than other energy sources. This is why the RSPB (Royal Society for the Protection of Birds) supports wind power in general, although the reserve the right to object to individual wind farms that encroach on rare bird habitats. After all the greatest threat to the UK’s birds is climate change, which threatens to wipe out many of the UK’s most beloved bird species altogether!

And again it’s important to remember that there are many things we erect in the countryside that are hazardous to wildlife. Indeed, a couple of km’s from the wind farm I came across a dead sheep with his foot caught in a fence. This is not unheard of. Sheep, deer and birds have a nasty habit of coming to grief with fences, either getting caught in them or flying/running into one and breaking their necks….indeed on another day I was out, I saw a sheep run right into a fence! (fortunately he got up, no harm done). A few years ago I was out with a group and we found a sheep up a hill with his head caught in a fence (we had to help free him). And later on in another of my walks I saw a fox clearly on patrol along a fence line, no doubt checking out if anything had come to grief.

So it is my experience that fences kill far more wildlife than wind farms, which if you think about it is hardly a huge surprise (given that they involve stretching a difficult to see barrier right about the height many birds typically fly at). Of course the farmers would point out that they need fences to keep lifestock from wandering off and getting themselves into trouble.

In fact on that point, an interesting aside here, I was in a mining museum in the Peak district the other week and one hazard the miners had to deal with was sheep. Subsurface mining works would open up holes in the ground, the sheep would get curious, wander too close to the edge and fall into the mine and land on top of the miners….thought fortunately it only ever resulted in “minor” injuries to either party ;0

Now the opponents of wind farms, will cry crocodile tears over those poor innocent birds killed by the nasty evil hobbits….sorry I meant wind farms! ;D. Well if they really cared about birds as much as they claim, why don’t they start campaigning against fences? Or against coal mines? Or oil tankers? 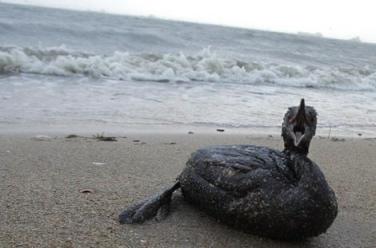 Or how about mountain tracks? As they involve cutting a deep swathe right through the heather and peat they can be quite disruptive to the natural environment. I’ve noticed a proliferation of these in recent years. Some admittedly are built in support of wind farm construction and I often wonder if there’s a way of putting wind farms up without using such tracks, e.g. using low ground pressure vehicles or air-cranes (heavy lift helicopters) to transport components up on top of hills.

Figure 5: Hill tracks are a growing problem in the Scottish highlands
[Source: Ramblers.org, 2013]

However, the impact of wind farms here is paled into insignificance by the number of hill tracks laid in support of farming and stalking activity (what we call deer hunting in this part of the world). Farmers these days, find themselves maintaining larger estates (and thus far too large for them to get around on foot). And the sorts who go out deer stalking are less of the typical hardy gentlemen laird and more of the soft palmed city trader, who don’t like having to trudge through mud for hours in the cold, rain and midges. And of course going out with the expressed intention of shooting things (often birds I might add!) is an activity that by its very nature kills wildlife!

So again, if you want to protect wildlife, I’d stop campaigning against wind farms and more specifically campaign against mountain track building, e.g. require landowners to seek permission for them and put together an environmental impact study. That would also indirectly slow down wind farm deployment….well it would if it weren’t for the fact that wind farm developers often need to get planning permission and generally an environmental impact study is part of that process!

Critics of wind power often try to claim that it brings “instability” to the grid. As I’ve pointed out before, while wind power has its limits, actually renewables play an important role in balanced grid. Critics point to payments made to wind farms not to generate power, so called constraint payments, which total millions per year. However, those critics often forget that ALL sources of energy receive such payments and over the last year just 4% were paid out to wind farms.

Similarly critics will try to blame wind power for recent rises in utility bills. However as I’ve pointed out in a prior post, given that the bulk of energy is currently generated by fossil fuels and that renewable installation costs are falling, a more reasonable explanation would be rises in wholesale Natural Gas prices….or simply price gouging by utilities.

And while in countries which adopted heavy investment in renewables (such as Germany or Portugal), bill did go up during the early phase of the program, since then bills have at worst stabilised or actually falling, as the increased renewable energy supply has served to insulate them from increased natural gas costs.

All in all, its a problem of context. Opponents of wind turbines will make a big song and dance about the problems with wind power, then conveniently forget that other energy sources are not without their costs and environmental impact.

Yes fences kill wildlife, but the farmers would point out that without fences, livestock would wander on to roads and then how many of the little critters would get run over?….and how many cars would they write off ? Stalking is important in the country, its supporters would argue, as it helps maintain balance in animal populations. Otherwise the deer would breed out of control and cause considerable environmental damage.
Indeed, one of the biggest obstacles to regeneration of the ancient Caledonian forests is deer and their habit of chewing on saplings (and the second biggest threat is climate change!). Stalking also provides much needed employment and revenue to highland communities.

Wind farms do have an environmental impact, but it’s an impact which has to be put in context. A knee jerk rejection of them is so much a NIMBY response but more an example of BANANA’s.

3 Responses to What is so bad about Wind farms?