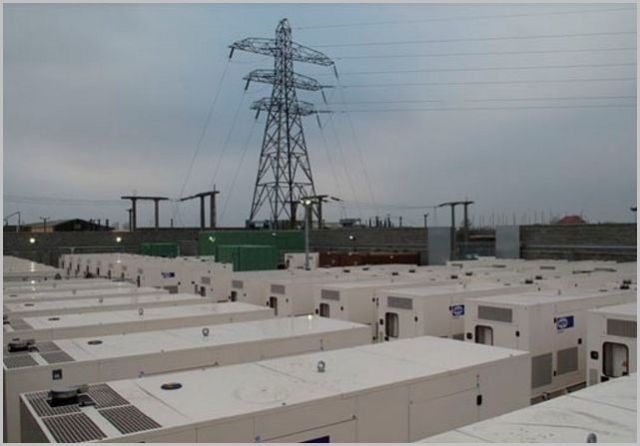 There are no sliver bullet solutions to the UK’s current energy problems. Wind power can certainly help, its led to big drops in the UK’s carbon footprint already, but only as part of a balanced energy diet within a grander overall energy strategy. However the Tories are hostile to wind power, preferring instead foreign owned nuclear and fracking, even thought neither is in a position to deliver any significant quantities of energy for some time to come.

This raises the risk of black outs if something isn’t done to plug the gap. So what is the Tory solution to this looming energy gap? Well instead of wind farms they favour diesel farms, clusters of diesel generators in fields up and down the country, subsidised by taxpayers I might add. If you ever want an illustration of everything that’s wrong with UK energy policy this is it, where to start with this one.

Well for starters, diesel generators, while cheap to install are expensive to run. That’s why they are only ever used for generating electricity where there’s no other alternative (e.g. off grid power generation or backup generators). And with oil prices now on the way back up, those costs will start rising. They aren’t very efficient either. Yes a diesel engine in a car is more efficient than a petrol engine. But for power generation CCGT or IGCC plants have significantly greater efficiency. Potentially up to 55% efficient v’s at best 35-40% for diesel (once the BoP is accounted for).

This also means that diesel generators are far more polluting, both in terms of carbon emissions and in terms of all the other gunk that comes out of a fossil fuel plant. It beggars belief that someone can object to a wind turbine, yet look the other way to a bunch of these noisy beasts belching out carcinogenic fumes morning, noon and night. And again, if you are a UK resident, your paying for em. Carbon capture and storage is also a lot harder to implement with diesel farms than with the aforementioned gas cycle plants. So we lose that option too.

The irony is that I’ve long favoured the idea of distributed power generation, over centralised power stations. However, my preference is for CHP systems. They can run on a variety of fuels, including biomass or hydrogen (as a long term replacement for natural gas). And as we make use of the heat to meet winter heating demand (which represents a greater proportion of the UK’s energy demand than electricity remember), they are much more energy efficient, up to 85% efficiency is possible (so even running on fossil fuels, they’re 2.5 times better than diesel farms and nearly twice as efficient as a gas turbine plant).

So it would be all too easy to alter this policy slightly and achieve a similar result, just one that promotes renewable energy, cuts emissions, lower energy costs and helps keep homes warm in winter. So why is the government opting for diesel farms over CHP? Because CHP plant would be based in cities were the plebs live. You think home county toffs what money spent on keeping the great unwashed warm in winter! When instead they can earn a nice pot of cash putting a few diesels in some idle corner of their estate. Furthermore CHP might actually work (up to 40% of some European countries installed capacity is CHP), hence they’re will be no need for fracked gas or new nuclear plants. They are picking the worst possible energy option not despite it being so awful, but because it is so awful.

Any semblance of sensible energy policy has long been abandoned by the Tories. I think the UK’s post-brexit motto has to be go sell crazy some place else, we’re all stocked up here!