Monbiot having some fun enjoying his white middle class privilege….

This last week George Monbiot (the same person who was convinced by Fukushima to support Hinkley C and that brexit wouldn’t be so bad…even thought all talk of preserving environmental standards and workers rights has now been moved to the non legally binding part of the revised withdrawal agreement) encouraged people to join extinction rebellion and “get themselves arrested”. Its a middle class thing I suppose. Good luck trying to get into the US or the EU post-brexit afterwards mind!

I’ve been a bit worried about the anti-climate change group extinction rebellion for sometime now. As I’ve mentioned before their stated aims are just plain crazy and their methods counter productive. Case in point, this week they held a protest halting commuter trains in London…..and promptly got beaten up by angry commuters (which if you’ve ever been on a London commuter train at rush hour, should hardly come as a surprise….which just goes to show how out of touch this lot are). 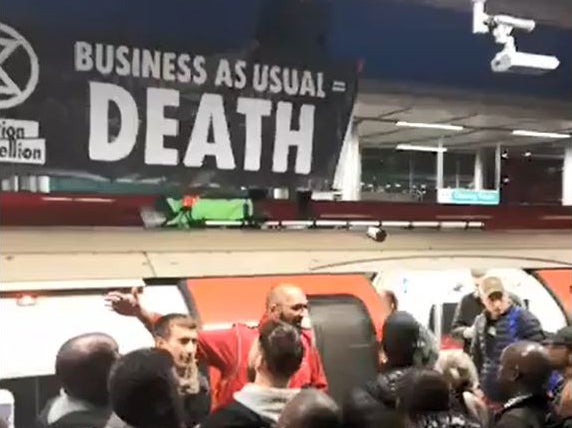 ER’s proposed solution to climate change is to use a “citizens forum”….to solve one of the most complex problems the human race has ever had to deal with. I recall joking that the likely outcome of such a forum would be a public brawl. Well what we saw on the railway platform the other day was ER’s long cherished citizens forum and the outcome was pretty much as I predicted. Too be clear, I’m not condoning such violence. I’m simply acknowledging the violence inherit in the system.

One of my long standing points on climate change is that there is little point advocating a policy if you aren’t going to get the majority of people to adopt it. And given how ER can’t even get its own supporters to match its high ideals (e.g. Emma Thompson telling people not to fly and stop eating beef, then sitting in first class eating a steak), its a bit rich expecting everyone else to do so.

But seriously, protesting against public transport (and this isn’t even the first time they targeted public transport, they did it before back in April), are you guys for real? Commuter light rail is about as energy efficient as you can get. Trains consume about 1.6 – 4.4 kWh’s per 100 person km, against 40 – 80 kWh/100 p-km for a car (so trains are at least 8 to 50 times better for the environment than driving). And while there are issues with decarbonising road transport, its a lot easier to implement those changes with public transport, trains in particular (as they can be easily electrified and take advantage of an increasingly decarbonised electricity grid).

I’ve been meaning to write a more in-depth article about public transport and the difficulties in getting it to work on a larger scale (i.e. how to convenience the majority of road users to give up their cars) for some time now. But in summary, there are many problems, ranging from load factors, pricing, infrastructure costs, integration (having buses, trains and trams work together to allow seamless door to door journeys), cultural issues, etc. But one of the often overlooked factors is reliability.

If you want people to give up their cars they will only do that if they are reasonably assured that you will get them to their destination and home again. They need to be confident that they aren’t going to be late for work or get stranded somewhere. This has been a big problem with the UK’s public transport system since privatisation. Some have had one too many bad experiences, given up on public transport and now just drive everywhere, even in situations where it takes longer and is actually more expensive.

So in that context, by undermining the reliability of public transport, to say this action was massively counter productive is to put it mildly. Some of those commuters delayed by this protest got in their cars (or a taxi) and drove to work instead. And some will probably keep on driving so long as these protests continue. And given the noted disparity between public transport and cars, it doesn’t take a huge number of them to do that to wipe out the environmental benefit of those who stick with public transport. To be blunt, short of Greta Thunberg showing up at the white house wearing a MAGA cap and driving a coal rolling humvee I cannot think of anything that would be more counter productive.

And inevitably ER have been running damage control. Oh most of us opposed this action…but you let it go ahead anyway. We’re trying to undermine capitalist London. Firstly, capitalism and climate change are two completely different issues, don’t confuse the two (renewable energy companies exist in the same capitalist economy remember). And secondly what about the NHS nurses and teachers trying to get to work? What about their patients and pupils? Plus I happen to know (from people who work in London) that quite a few traders do cycle or jog to work (presumably to help deal with their anger management issues). So what are you going to block footpaths and cycle lanes? But look at all the publicity this action generated. Ya, almost entirely negative as it affords the right wing media a perfect open goal to take cheap shots at all environmental protesters (such as the school climate strikes). When you are attacked by both the Guardian and the Daily Telegraph in the same week, you know you are in trouble.

In fact, at the risk of sounding a little conspiratorial, I think we do need to consider the possibility that some in ER might be shills in the pay of the fossil fuel industry. Its long been a tactic of the political right to infiltrate paid spies, informants and agent provocateurs into left/green protest groups in the hope of turning the public against them and giving the police the excuse to violently suppress an otherwise peaceful protests. Hence its entirely possible that this is what is going on behind the scenes within ER. They are doing the fossil fuel industries dirty work for them (wittingly or unwittingly…or perhaps half-wittingly!).

All in all, I’d argue the reality is that extinction rebellion aren’t really an environmental protest movement, nor even anti-capitalists (if they were then surely they’d be protesting outside Shell or BP’s HQ’s or outside the banks). They are a bunch of angry populist Nihilists raging against society in general, not unlike the gilets jaunes in France (who basically work for the far right). They may as well go around with placards saying “down with that sort of thing”. Hell, I’m pretty sure that if we invented a viable alternative to fossil fuels they’d probably start gluing themselves to wind turbines. So no don’t join the “rebellion”, ignore George Monbiot and don’t get yourself arrested for no good reason.

If you want to do something about climate change there are various steps you can take (and as noted one of those is using public transport). You can join more legitimate protests and vote for parties that will implement real change (the Greens, SNP or lib dems) and oppose those who won’t (i.e. the Tories and labour, both of whom include quite a number of climate deniers in their ranks).

And certainly stopping brexit is crucial to any sort of pro-environmental movement in the UK right now. A point I bring up given the close links between Extinction Rebellion and Momentum (aka the Judean people’s front), allies of arch brexiter Jeremy Corbyn. Both of whom will be notably absent from this weekend’s anti-brexit rallies (most important day in UK politics in decades, likely to be the biggest protest and Corbyn’s going to be in Liverpool!).