Why Venezuela should worry us all

I caught a video series from a travel vlogger on Youtube recently, who travelled to Venezuela. It is worth a watch, because it shows the situation in Venezuela is a good deal more complicated than is often portrayed by the media. Which explains why the crisis hasn’t resolved itself. And unfortunately why its unlikely to do so any time soon. And, as we shall discuss, that’s worrying because Venezuela might be something of an example of what the end state post-populism (and post peak oil) will look like in many other nations.

As our vloggers posts indicate, times are tough in Venezuela, there’s a lot of poverty and entire neighbourhoods of abandoned buildings and homes (including some affluent areas). But on the other hand, its not like you wouldn’t beggars going through bins in many other South American countries (or in NY or London). And as he also shows, not everybody in Venezuela is hard up. There are some safe parts of Caracas with will stocked shops. And while yes Maduro and the Bolivarians are about as popular as a steaming pile of dog doo at a hypochondriac’s support group, there are some Venezuelans (mostly the urban poor in the favelas) who still support him, as they fear the consequences if the regime should fall (better the devil you know).

In short, the situation on the ground is isn’t as simple as its portrayed in the media. Inevitably, the western media go there, walk a few yards from their hotel, and film some homeless people raiding bins, scenes they could probably have filmed in NY or London (they did the same in the Irish banking crisis, film the a homeless guy in front of a boarded up shop and try to claim this was what the whole of Ireland was like) and then go home. Equally of course, RT will show up, walk in the other direction and film in some affluent neighbourhood where there is no poverty or beggars. Clearly the true situation is between these two extremes. 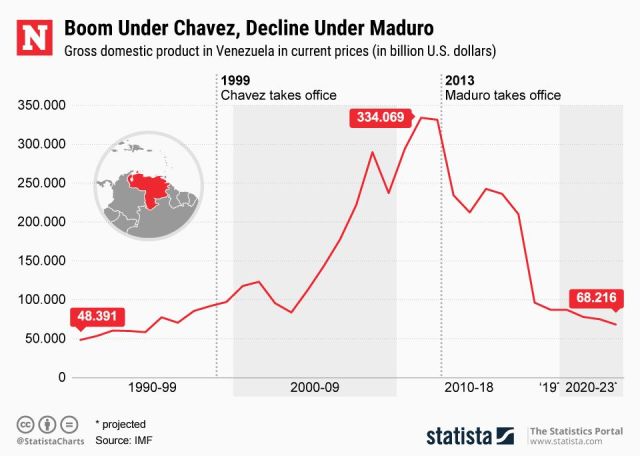 Its important to understand how we got here. As I’ve mentioned in prior posts the narrative that Venezuela enacted socialist policies which it could only afford so long as the oil prices were high is simply not correct. At the start of Chavez reign (in 1999) the oil price was actually lower than its current price. And in truth the Bolivarians policies (at the start anyway) we’re that radical, consisting of improved social welfare, job creation and generally trying to create a kind of economic safety net for the poor.

Where things started to go off the rails was after the failed 2002 coup attempt (which was almost certainly supported by the US). After this event the Bolivarians enjoyed wide spread popular support, they had more direct control over the Army and police (essentially giving them Trump like defacto immunity from prosecution). But they also became more paranoid, seeing CIA agents hiding behind every bush. In short order, they became less socialist and more left wing sadopopulists.

One of the immediate consequences was a series of massive power grabs and retribution sough against anyone who was perceived to have supported the coup (real or imagined). This included the wholesale nationalisation of large parts of the economy. And I don’t just mean things like healthcare or utilities. We are talking about private companies, the media and even small shops and bars. Chavez would literally go around the country pointing at businesses that seemed to be doing a little too well and demand they be nationalised. Even Kellogg’s cereal was nationalised. Yes, Tony the Tiger (or Toni El Tigre I assume) was conscripted by the Bolivarians (I assume they changed the slogan from “they’re great!” to “they are the ideal sustenance to allow the workers proletariat to undertake the historic class struggle against the despotic Bourgeoisie”).

And the people chosen to run these businesses weren’t exactly the business all stars. They were usually chosen for their loyalty to the regime, not their business acumen. By way of an analogy, imagine we take Corybn’s cabal of hanger’s on (the ones who have led labour to historic defeat after defeat despite the open goal of a divided Tory party) such as Len McCluskey, Karen Brady, Rebecca Long Bailey etal and put them in charge of BT, RBS or Tesco. How do you think that would end? So as you can imagine the Bolivarians began running the country very, very badly, pretty much running most of the country’s economy into the ground.

Nowhere are these problems more obvious than in the state run oil company. Venezualean oil production has collapsed over the last few years. In part this is driven by the fact that the bulk of Venezuela’s remaining oil reserves are unconventional. Which are both capital intensive and technically difficult to extract. So while there are geological, technical and economic factors at play here, miss-management by the Bolivarians has to be considered a factor as well.

Venezulan oil production (in thousands of barrels per day average). While there were some production gains under Chavez early on, since 2015 production has collapsed

In fact to make things worse, with no real rule of law, corruption has became a massive problem. And the populist policies passed by the government just made things worse (e.g. in the event of price controls are you going to sell your produce at a loss, or sell it at inflated prices on the black market, or smuggle it out of the country and sell it there instead?). Even the few private businesses that have managed to survive now have to pay protection money to gangs. This has gotten so bad, its probably better to consider Venezuela as a kleptocracy (a nation run by thieves) than a socialist state, or a standard autocracy.

So the question is, how does it all end? Well that’s the problem, there is no easy way out. As noted, while the Bolivarians clearly no longer command majority support (and would likely be annihilated in any sort of free and fair election), they still enjoy quite a bit of support from the powerful minority who have benefited from their regime (i.e. those given free reign to steal everything not bolted to the floor), the urban poor and the regime’s armed militia who are unlikely to go quietly. Its classic sadopopulism, they have it bad, but at least now the wealthy and the middle classes who screwed them over for generations are finally getting their comeuppance.

And in some respects, there is a logic to this. After all, if the Bolivarians lost power, is it likely the situation for the urban poor is going to get better or worse? Similarly, while I suspect Russia and China (who have been buying oil off the regime) are not exactly thrilled with the situation in Venezuela, what possible benefit would they gain by destabilising the current regime? At best, they’d end up losing an awful lot of money. At worse they’d end up refereeing a civil war. Which also explains the lack of any intervention from the US (bad as Maduro is, a civil war and the complete collapse of any state control, with a subsequent worsening of the already bad migrant crisis, would be significantly worse).

While I suspect the regime will collapse eventually (any government this dysfunctional is living on borrowed time), its unlikely to take place anytime soon. And will likely be down to some external factor or random event (a hurricane, disease outbreak, earthquake, a football game, etc.). But even then, the damage has already been done. Any new regime is going to be faced with a massive uphill struggle to fix things. Anything of any value is still owned by a bunch of kleptocrats who aren’t exactly going to hand it over willingly (and as noted they have an armed militia to protect them). Push comes to shove (after a brief civil war), they’ll cash out and flee abroad with what little wealth the country has left.

And the real worry for us in the west is that the Venezuelans are arguably the canary in the populist coal mine. Much of what we see going on there is being replicated in Trump’s America, Putin’s Russia, Hungary or brexit Britain. And even if you can force the populists out (which would mean winning an election in a rigged system), the plutocrats behind these populists have used these regimes to massively increase their power and wealth.

Even if by some miracle Bernie Sanders (or some other left winger) could win the US election, he’d achieve diddly squat. In fact I’d expect him to be impeached pretty quickly (his crime being that he actually tried to change things, the one crime a US president can now actually be impeached for). If, like the Bolivarians, Trump and his cabinet can get away with high crimes and suffer no consequences, then that means that as of the other week, then America ceased to be a democracy. Its now a plutocracy, deal with it. And the same is equally now true of the UK.

And no, a recession won’t change anything nor would an economic collapse. If that were true Maduro would have been out on his ear several years ago. He is the tribal chief of his faction, they will back him no matter what. Same way Trump supporters will follow him into the abyss, even when they know full well he’s screwing them over. Economics and pesky little facts don’t matter any more.

And there is a peak oil element to our Venezuelan canary. The collapse of oil production has contributed to the collapse of the nation’s economy, much as how the Soviet economy also collapsed after their oil production peaked. So what we are seeing in Venezuela might well be what gets replicated globally if and when oil production peaks. A point I bring up because there are some on the left who see a silver lining to peak oil, in that they assume that this will bring down the plutocrats and capitalism. Be careful what you wish for. As Venezuela shows (or Putin’s Russia), its likely what replaces capitalism will be far worse and a lot more autocratic.

Of course this does raise some troubling questions. Last time populist governments were this popular it was the 1930’s and the end consequence was world war II. Another possibility is that governments, democratic or otherwise, will simply be bypassed by corporations and the wealthy. Like the senate of ancient Rome after the rise of the Emperors, we’ll still have some debating club of senile old idealists who’ll pass meaningless resolutions that everyone will ignore. Meanwhile the real power will reside in corporate board rooms, or the throne rooms of defacto rulers and populist figureheads on social media.

Indeed,  many futurists or sci-fi authors do not think it is a given that future societies will be democratic. In “Starship Troopers” democracy is remembered as a failed experiment that brought the world to the brink of collapse. In Frank Herbert Dune universe, democracy has been superseded by an imperial regime of various ultra-powerful squabbling families.

For that is the real lesson of Venezuela. Its very easy to kill a democracy and nearly impossible to put back together once broken. And if you support populists (be they the left or right wing variety, it doesn’t matter which) you are the ones who will be responsible for the inevitable mess that follows.

1 Response to Why Venezuela should worry us all