How grids will cope with electric cars

A few months ago (in the before times), the UK government’s BEV (Battery Electric Vehicle) taskforce released a report that presented both the benefits and challenges of transitioning road transport over to electric vehicles. Given that the media tended to focus on the more sensational aspects of the report (i.e. in theory, if all of those BEV’s were to be plugged in all at once this could cause blackouts), I thought it would be useful to provide a more balanced review of this report and what it means going forward.

Firstly, one myth that I frequently hear is that electric cars would require a massive increase in power generation to charge all those cars. However, the scale of this problem is perhaps being exaggerated somewhat. As the report mentions, even if we converted all of the UK’s vehicles over to electricity, it would only increase demand by 30%, which matches values for similar reports, such as the one below from the ICCT in 2013. 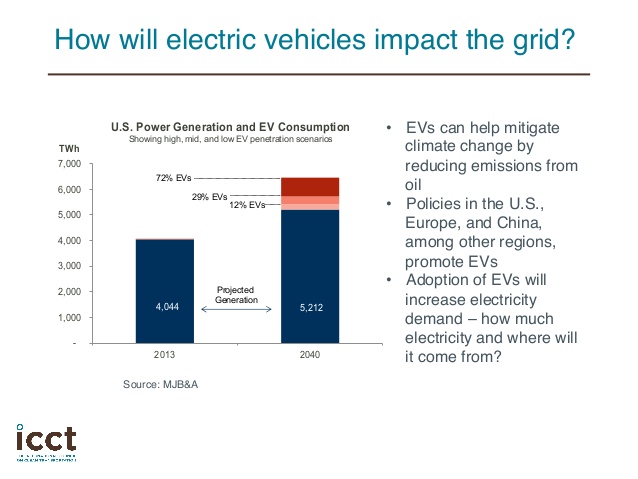 We can estimate this figure ourselves by taking the average fuel economy of an EV (say for example a Tesla Model X, which work out at about 36 kWh/100 miles), the number of vehicles in the UK (38.7 million, of which 82% are cars) and the average distance driven per year (7600 miles) . Multiplying all of that out we get a total annual energy use of 106 billion kWh/yr. The current annual energy consumption of the UK grid is about 334 billion kWh/yr. So even if we converted all of the cars in the UK over to electricity, you’d only increase electricity demand by 30%, in line with our report’s estimate.

And if anything I’d argue this is probably an over estimate. For in truth we are unlikely to ever have that many electric vehicles on the road. Vehicle ownership levels and distances driven have been falling for several years now (so likely there will simply be less vehicles in future). Better public transport, cycle lanes and facilities such as car clubs(of which I am a member) are negating the need for individual vehicle ownership.

Furthermore, some vehicles will not be converted to BEV’s for various reasons while electric vehicles might be suitable for many, given that 80% of all vehicle journey’s are under 20 miles, but they won’t be suitable for everybody. Long distance lorry drivers, travelling salesmen, police, emergency vehicles & taxi’s in rural areas, will probably not convert over, as you’d struggle to design a vehicle with enough range to meet their needs (likely instead these vehicles will be powered by a hybrid powertrain, biofuels or Hydrogen fuel cells).

The discharge rate of individual charging ports can be quite high, potentially even higher than needed to power most houses

But what happens if millions of electric cars get plugged in at the same time and go to 100% charge all at once? Well certainly yes that would be a problem, as this paper discusses. Even just 5% of the UK’s current vehicle fleet (1.9 million cars) all being charged at a rate of 50 kW’s would require double the peak output from the UK’s current grid (currently about 60 GW’s). Fortunately, this can be resolved using smart grid technology, which controls and regulates charging to prevent such spikes in demand.

As noted, the vast majority of car journey’s are relatively short (less than 20 miles), while the range of electric vehicles on the market is between 150 to 350 miles. Thus on average most vehicle batteries will still be almost full when parked up. Given that your average car spends 96% of its time parked, then there’s no need to charge them up straight away (or use a supercharger to do the charging). It would make more sense to charge them at night using off peak electricity. Indeed modelling by the UK national grid suggests closer to a 4-10GW peak in grid demand due to electric vehicles. with smart charging.

Of course, as the aforementioned EV task report discusses, there is the issue of how to implement such a strategy. How do you motivate people to understand you don’t need to keep the car fully charged. We’ll need to tackle range anxiety (you don’t keep a petrol powered car fully fuelled all the time, why should it be any different with a BEV?). This could take the form of rewards for charging off peak or allowing vehicle to grid discharging, with higher charging costs if charging during peak hours. Such policies already exist for large industrial users of electricity (cold storage facilities, steel mills, factories, etc.), whereby they are able to buy electricity at a discounted rate. However, in return they are expected to de-rate or turn off equipment during times of peak demand (if they don’t de-rate, they get charged at a premium rate for their electricity).

Of course there is the question of how to control all of this and the solution would be some sort of smart charging app, controlled by a mobile phone. But as the report highlights that would require the availability of data in compatible formats, as well as data protection. The charging ports themselves will also need further harmonisation, as there are several competing versions in use. Keep in mind that building regulations may soon require the inclusion of BEV charge points.

There is a wide range of different charging ports, which might need some standardisation

So its not going to be straightforward. An awful lot of infrastructure will have to be build, notably all of those charging points, raising questions as to where will they be located, how their installation is funded and who will be responsible for maintaining them (the vast majority of UK cars are currently parked on private property, typically drive ways, private roads or car parks, rather than in garages or on public streets).

So in fairness to the naysayers, they were right…..several years ago, when the average range of electric vehicles was much shorter (20-30 miles and hence most would need recharging straight away), smart grids weren’t really an option and we all didn’t have wireless internet access via a hand held computer in our pockets. However, technology has moved on considerably since then.

There will also be a need for some additional electricity capacity and improvements to the grid will be needed, particularly if we are using more and more intermittent renewables to power everything. But these are not an surmountable problems. The problem is they require long term planning to be put in place now if they are to be successful.

1 Response to How grids will cope with electric cars