Heavy water reactors (HWR’s) use heavy water (D20 Deuterium as opposed to hydrogen) as both a moderator, and in many cases a coolant also. The term Heavy Water Reactor is a catch all term as it includes a broad range of reactor designs running from the RMBK right the way over to the CANDU design. Given that nobody is advocating the building of more RMBK’s, indeed its difficult to believe the Russians still have 11 of them operating, the less said about them the better. The CANDU is the primary reactor one usually refers to when talking about Heavy water reactors, so that is what we’ll focus on. 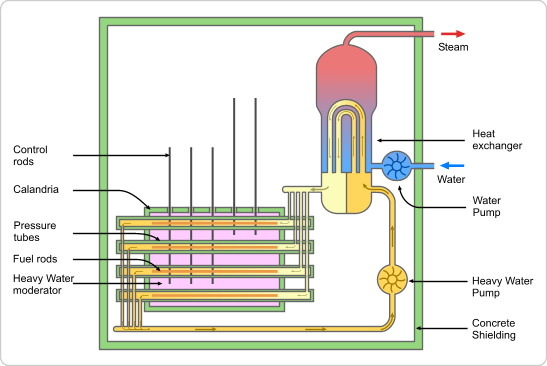 A schematic of the CANDU reactor design (from Wikipedia)

The CANDU consists of a Heavy water filled vessel with many pressure tubes inserted horizontally across it containing the fuel (in contrast to most other reactors which hold the fuel in the vertical direction). The coolant (also heavy water) passes through the pressure tubes and into the steam generator, before being returned to the reactor.

The CANDU has a number of advantages over the LWR’s. Firstly one doesn’t need the heavy industrial kit needed to forge the reactor pressure vessel, as its “pressure vessels” are lots of relatively small pressure tubes containing the fuel. A lower operating temperature means it doesn’t need the sort of exotic alloys we mentioned earlier. The CANDU can also refuel while running, increasing capacity factors. As it can run on natural or only lightly enriched uranium, a nation adopting CANDU’s doesn’t need an expensive uranium enrichment system. CANDU’s could also in theory utilise the Thorium cycle, thought this is still a subject of debate and experimentation (the fact they can is not in dispute, it’s more a matter of the practicalities of using them in this role).

However, the CANDU has a number of significant drawbacks too. Firstly, it has a positive void co-efficient. This means that if the core temperature rises, causing voids to form as coolant flashes into steam, the reactivity of the reactor also rises, which of course leads to a further rise in temperature and more voids (and so on). While the void co-efficient of a CANDU isn’t as high as that seen with the RMBK, it’s still a potentially serious safety hazard, and certainly doesn’t fit in with our “passively” safe criteria. While not as vulnerable to a LOCA type emergency as a LWR’s, CANDU’s are still at risk in certain situations (debate about that here). The world’s first nuclear meltdown for example was on Chalk river in Ottawa 1952 (see NRX accident). At best we can say that CANDU’s are no worse than LWR’s from a safety point of view.

Also, as they run on Natural Uranium, CANDU’s generate much more nuclear waste than LWR’s (about 7 times the amount by mass).  CANDU supporters would note that because this waste is less radioactive it can be racked and packed tighter, which means the problem isn’t quite as bad as made out above. But if were looking to reduce nuclear waste flows, CANDU’s don’t seem like a good idea.

Cutaway views of a CANDU reactor pressure vessel, based on the CANDU 3 design (1,440 MWth)

Then there are other aspects of the design one has to take issue with. If you look at the picture I’ve included above (an illustration of a CANDU Calandria). You will note the mass of coolant pipes going into the reactor in both pictures (slightly obscured in the one on the left for clarity) which then intersect with another mass of pressure tubes (containing the fuel), the control rods (descending vertically into the reactor), with another set of coolant outlets the other side (not easily visible) and a carbon shield around each pressure tube just for good measure. The end result is to create what I can politely describe as “a plumbers nightmare”. FMEA would have quite a few things to say about “stuff that could go wrong” with that! Mass producing this tangle of pipes? Forget it!

Also, while a CANDU reactor program is typically cheaper to setup (as you don’t need to build uranium enrichment plants) the fact you need to get supplies of heavy water as well as the fact the Calandria’s are often larger than a LWR pressure vessel (so higher costs) means its questionable as to which is ultimately cheaper. The lower operating temperatures mentioned earlier also of course lead to poorer thermal efficiency.

5.3       Proliferation issues and the CANDU reactor

There’s also an issue with CANDU’s relating to Weapons proliferation, as they can potentially be used to breed plutonium. It’s noteworthy that the only countries using them (or CANDU-derivatives) are Canada (where it’s a case of jobs for the boys) or countries that are (or were in the past) pursuing nuclear weapons.

My view is that, while yes there is a risk here, how seriously we should take it largely depends on the circumstances. If Denmark suddenly announced plans to build a load of CANDU’s I won’t be worried (I’d be very worried about they’re bank balance and sanity but not about them building bombs!). But if Kim (not-so) Yung (and very) il suddenly expressed an interest in them…..I’d be a little worried!

One way to solve this dilemma, as the Canadians seem to be doing with the next generation CANDU, is by eliminating many of the CANDU’s supposed unique features – hence why I doubt anybody outside of Canada will ever buy them!

Indeed, so desperate are the promoters of the CANDU to sell the reactor to somebody, as even the utility companies in Canada don’t seem keen, they are even talking about using  CANDU’s to aid tar sands extraction. To me this is practically science abuse. You’re going to take high grade zero-carbon energy from a nuclear reactor, using up some of our precious remaining reserves of Uranium in the process. Generating said power in a generally inefficient (and not entirely safe) reactor in the middle of the Canadian tundra, just so you can extract a load of low grade carbon intensive energy in the form of fossil fuels!….I think somebody’s been smoking a little too much BC bud! If the Canadians actually go ahead with this one I think we can give them an award for the most perverse abuse of science and misallocation of resources in world history!

All in all, it’s difficult to argue that CANDU’s could provide something better than LWR’s. At best they are no worse. Looking back at our list of criteria we would struggle to tick any of the boxes with a positive score (at best it gets a passing grade on some of them). So in the context of the current discussion they are off the table, as the CANDU, and heavy water reactors in general, represent an antiquated and obsolete reactor design that’s had its time in the sun.

Next we will review the High Temperature Gas Reactor.