Not been able to do much blogging recently, I’ve been having some serious IT related issues, quiet apart from the normal summer work load (academics are surprisingly busy over the summer, we don’t just all go to the beach or something, as it’s the only chance we get to do any research, read up in the library or prepare lecture notes for next semester).

Anyway, I caught an episode of “file on 4” by Julian O’Halloran while out and about the other week which discussed the plight of British Coal. At one point in its history Britain practically ran on coal, but since the 70’s and 80’s the “dash for gas” and the rise of renewables has seen coal use decline significantly. Mention the term “king coal” to most people in Britain these days and they’ll think you’re talking about a Chelsea footballer  😉

Furthermore, much of the UK’s coal is now imported. Hence even though there has been an increase in coal consumption over the last year or so (driven by falling prices for coal and rising prices for gas) much of this was imported. UK Coal PLC, the defacto quango charged with running the bulk of the UK’s remaining coal mines, is in serious financial difficulty as a consequence of enormous pension liabilities, fines for health and safety violations and a recent fire in the Daw Hill coal mine that has since forced that mine to shut down completely.

All in all one has to question how sensible it is for the UK to continue subsidising an industry whose purpose runs contrary to official energy policy, which is supposedly to focus on low-carbon alternatives. Granted many power companies still want to continue using coal (they often talk about carbon capture and storage as an option), but that doesn’t mean the government should be helping them. I mean many people want to continue smoking, but most people agree that the government should enact laws to discourage such activity, or at the very least tax cigarettes heavily to offset the costs it imposes on the taxpayer.

Apologists for UK Coal will point to the issue of “security of supply”. However, as File on 4 points out barely 26% of the UK’s coal supply comes from domestic mines (and coal is only about 29% of UK energy supply, so that’s about 7% of the UK’s energy output coming from domestic coal production), so it doesn’t provide that much security. And with sources of coal as diverse as the US, Canada, Colombia, Russia, Australia, Germany, its not as if were dealing with a situation where the coal tap can be turned off.

Furthermore, many of the UK’s mines are approaching exhaustion for current seems of coal. Without substantial capital investment (which would need to be underwritten by the government as no bank will provide credit otherwise) many will close within the next decade for lack of coal.

Of course there is a bit of history here. Back in the 80’s the Tory’s under Thatcher went out of their way to smash Britain’s coal mining industry, largely for ideological reasons. The powerful mining unions had brought down two previous tory governments and when Thatcher came to power the Tories were out for blood. Of course, they then realised after the event that shutting down the coal industry was not in fact going to save them money, but cost them rather a lot. Close out costs for many mines (demolishing mine works, stabilising mines and slag heaps, environmental clean-up, etc.), the pension costs for retired miners, health care costs for many miners crippled by a life underground all added up.

And of course many of those newly unemployed miners went straight down to the job centre and started claiming benefits, some of them are still claiming to this day. This meant that working class parts of Britain that had once netted significant tax revenue suddenly became virtual welfare colonies and a huge drain on the state’s finances. Just look at the state of many Welsh mining towns, such as Merthyr Tydfil as an example. 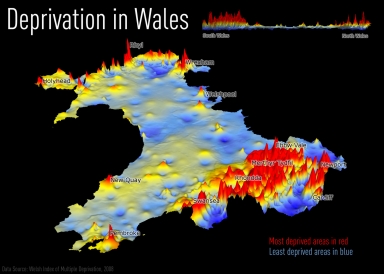 Figure 4: A poverty map of Wales, the red spikes are the former mining & industrial towns! [Source: Welsh Index of Deprivation, 2008]

So one could blame a certain level of historical guilt felt by the Tories for their actions in the 80’s explaining their reluctance to cut off the life support to British coal. But all in all, I would still argue that coal’s days are numbered, if we truly want to subsidise “energy security” renewables are the best way of doing that and not just from a carbon neutrality point of view.

The not so ultimate resource

And there’s another message buried within British Coal’s woes, that of resource availability. The Cornucopians of this world will often point to the fact that the UK has a thousand year’s of coal underground, or that the US has a similar level of shale gas/oil, tar sands, etc .and that as a result “peak oil” and such things are a myth. However, my response is to point out that such a belief ignores the geological and economic facts of life.

Only a fraction of the world’s fossil fuels will ever be extracted, even we ignore climate change (which we can’t!). The vast bulk of these resources are too expensive to extract, technically difficult to access and we simply can’t extract them at any arbitrary rate of our choosing. Any extraction rate will likely be well below present demand. The woes of Britain’s coal industry serve as a stark example for how things will play out with other fossil fuel resources around the world, even Australia’s coal industry is facing “structural decline”.

While unfortunately, the evidence does seem to point to the fact that there is still more than enough fossil fuels available to cause dangerous climate change, going after these resources, will only offer a temporary respite, as I highlighted with regard to the Tar sands and Shale gas resources of North America before.

Hence I would argue, since we’re going to have to switch to alternatives sooner or later, why not do it now while we still have an electricity grid that runs 24/7 and a transportation system that works.

1 Response to Old king coal is a very sorry soul