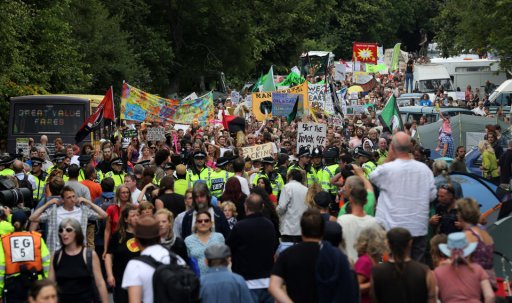 Protests against Cuadrilla Resources and its shale gas activities in Balcombe stepping up a gear in the last few weeks. Inevitably the company and the Tory Government ,who committed to gas ahead of renewables and nuclear (ironically, as the bill was supposed to pave the way for more power stations!) in their recent energy white paper, quickly went into full fanatic spin mode.

One of the central claims is that shale gas production in the UK would bring down the price of bills in the UK. After all its claimed that shale gas brought down US gas prices. David Cameron himself was very keen to make this point, and several church groups seem to be backing away from the protests on grounds that it might help reduce fuel poverty.

But nobody, neither protesters nor the media nor the government seems to have paused for a second and fact checked. Did shale gas really bring down the price US wholesale gas prices?

The truth about US Gas prices

Below in figure 2 is the US Wholesale gas prices trend over the last few years. As you can see gas prices rose steadily over the summer and then autumn of 2007, before dropping dramatically after the financial crisis hit to reach its nominal historical levels. 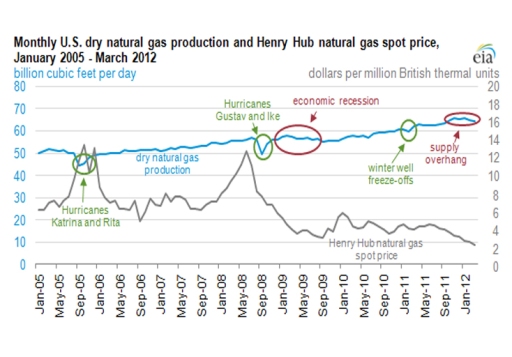 This spike in prices is probably due to events back in the winter of 05/06, when a combination of a cold winter and hurricane damage to gas facilities in the gulf of Mexico almost led to the US running out of gas. Inevitably the spiv’s and speculators in Wall Street began speculating the same would happen again in the lead up to the 07/08 winter…until the economy fell off a cliff and they were sent running for cover. 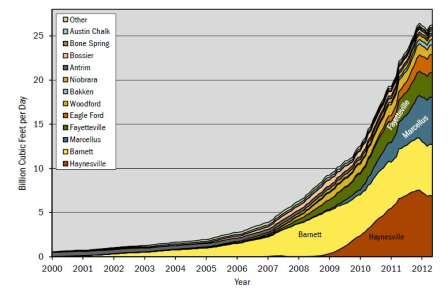 Figure 3, Shale gas production growth rates in the US
[Credit: Hughes (2013), based on EIA data]

In figure 3 is the rate at which shale gas came on stream (from David Hughes (2013), based on EIA data). As one can see the major drop in price occurred well before the bulk of the ramp up of US shale gas. So even at first glance its something of a dubious assumption to suggest that shale gas brought down gas prices. Indeed as I mentioned before, the ramp up of shale gas went well ahead of projections from the DoE, making it dubious to suggest that the markets somehow predicted it all in advance and cut prices.

Also its worth remembering that shale gas is not particularly “cheap” as gas comes. David Hughes, has pointed out that many US shale gas plays aren’t economic. As I mentioned in a previous article, Arthur Berman (a well known “insider” within the industry) has shown that many US gas plays are selling shale gas at below the market price. One has to question how dumping a lot of relatively expensive gas on the market is supposed to bring down prices. 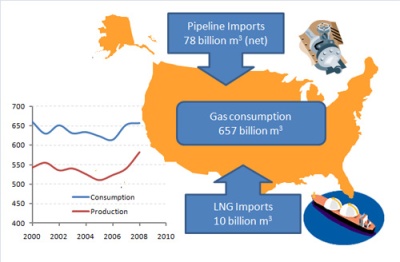 Figure 4, US imports of Natural Gas

Its also worth remembering at this point that Shale gas represents only around about 37% of US gas supply (as I calculated here). The rest is conventional gas production, often linked to oil production (hence its price tends to fluctuate with the oil price) and imports. Indeed in the wake of the 2005 spike there was a major effort to increase facilities to handle gas imports, notably via pipelines from Canada and the LNG route. This probably had a much more significant impact on US gas prices as it effectively connected the US with cheaper gas overseas, notably from the Middle East region and Australia.

I’m not suggesting that shale gas has had no influence on the US gas market, clearly it has increased domestic supplies of gas (indeed, imports via LNG are now down significantly) and probably helped to avoid a ramp up of prices as the economy rebounded. But it certainly isn’t the sole factor determining prices. Gail Tverberg over on the “our finite world” blog discusses numerous other factors influencing US gas prices, such as a lack of storage capacity (forcing companies into a use it or loose it position) and a lack of take up by consumers, likely due to the weak state of the economy.

Suffice to say its better to look at the gas market as a concert orchestra, with Shale gas being one of the guys at the back with a Tuba. Claiming he’s responsible for all the music (as supporters of Shale gas will attempt to do) is to ignore the bigger picture. Then again, I’ve long pointed to the inability of climate deniers (who tend to be the same people as shale gas promoters) to interpret a graph and correlate issues of cause and effect.

High noon for US shale gas

But how long will any influence shale gas has on US gas prices last?

Probably not very long. Already the rig count for gas wells is dropping, although there has been a concurrent ramp up of oil drilling rigs. David Hughes has previously suggested that the bulk of US shale gas plays are not economic unless there is some oil based extraction (i.e. combined tight oil and gas extraction). This trend in rig counts is probably representative of drilling shifting from the shale gas basins over to shale oil and tight oil extraction. 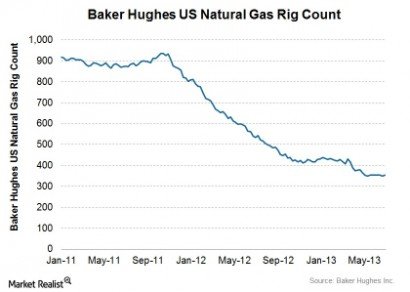 David Hughes also suggests that shale gas production has already plateaued and shale oil production will peak sometime around 2017, an idea the EIA now seems to support. And again, as I discussed before shale gas can only realistically provide a small fraction of the current US energy demand (at most 8.6% of total US energy consumption).

The latest EIA figures suggest just 10 years of shale gas reserves at current extraction rates (they give a figure of 97 Tcfg here or 1,931 mtoe, current production is 26 Bcfg/day or 189 mtoe per yr, 1931/189 = 10.2 yrs) with a likely peak of US shale gas production sometime before 2015. The EIA haven’t quite come around to this one, as they seem to be holding out for a proven reserves increase, even thought they themselves have been cutting shale gas reserve forecasts quite drastically for sometime now. Also even taking the highest available speculative value for shale gas reserves in the US, 567 Tcfg (note, unproven reserves, just a best guess, courtesy of the EIA), would only sustain present US gas demand (25.5 Tcfg/yr last time I checked) for 22 years. Thus shale gas is looking like it will represent but a small temporary blip in the US energy market.

Meanwhile back in Blighty…..

But that’s America, what about the UK?

Well its worth noting that even the shale gas drilling companies were, until a few weeks ago, claiming that drilling would have no influence on prices. As this article in IBTimes highlights, the primary justification for shale gas drilling in the UK has always been about security of supply. 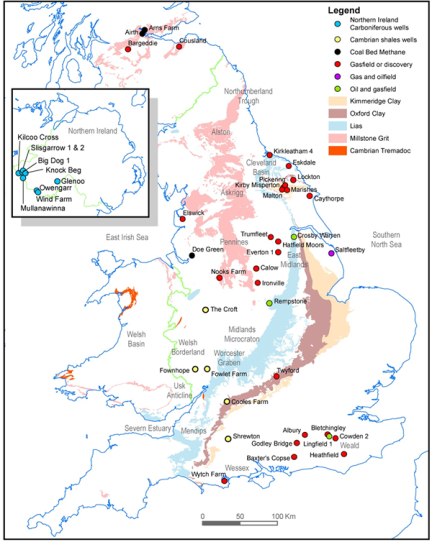 Of course even this “security of supply” concept is also somewhat dubious. As Tom Brown, a Senior Credit Executive at Norddeutsche Landesbank (hardly fluffy tree huggers!), highlighted in a recent letter to the Financial Times, there are many reasons to doubt both the economic arguments in favour of shale gas but also the security of supply argument. As he puts it:

“As for energy security, it is absurd to imply that gas extracted from the Norwegian sector of the North Sea is less secure than from the UK sector, unless you expect FT readers to believe that Norway could be overthrown by a hostile regime”

Just do the maths!

Furthermore, I would point to a UK parliamentary report which suggests that UK shale gas reserves are about 150 billion m3 (about 1,318 billion kWh‘s worth of energy). Sounds like a lot, until you realise that current UK gas consumption is around 857 billion kWh’s/yr. Total UK energy consumption incidentally is around about 205 mtoe (million tonnes of oil equivalent) or about 2,563 billion kWh’s/yr.

Thus, even if we could extract all of that shale gas (which we won’t) and we could extract it all at some arbitrary rate of our choosing (which we can’t), it would supply only 1.5 years worth of gas and (neglecting cycle efficiencies, i.e. assuming 100% conversion and no losses or leaks) it could only meet UK energy demand for about 6 months. Hardly much of a “solution” to the UK’s energy problems. Indeed if shale gas in the US is a lone Tuba in the Orchestra, in the UK it would appear to be the bored looking guy at the back with the little triangle.

And contrary to what you’ll hear from some sources, shale gas will not reduce carbon emissions, as there is good evidence to suspect it might have a higher carbon footprint than conventional gas resources. Indeed it might even be worse than coal. Finally, there are a host of other environmental, economic and practical arguments against shale gas , which businessgreen.com considers here.

In short if there’s one thing we can say about shale gas is that there’s likely to be more hot air extracted from the hype and spin about it than we ultimately get from the gas itself! The only people who will gain are the a small number drilling companies with dollar signs in their eyes. Belief in shale gas and its magical properties is starting to take on elements of myth and legend, its a bit like believing in the tooth fairy.

Certainly, if “security of supply”, reducing price volatility and reducing coal consumption are one’s true objectives, I would point in the direction of renewable energy sources. As every pound invested here will have a much more direct influence on these goals than that same pound invested in shale gas.

10 Responses to Can shale gas really bring down gas prices?